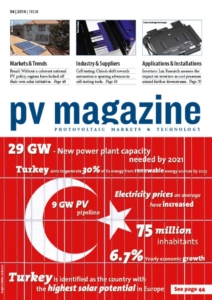 BOS hardware: Fostered in large part by the U.S. Department of Energy’s SunShot program, several new projects are expected to begin commercialization by year’s end with promises of up to 75% combined balance of system cost reduction.

One European manufacturer of mounting systems that is bringing fresh design to the U.S. market is A+ Sun Systems, based in San Bonifacio, Italy. The company’s first high tension wire rope racking system in California will be installed on an unusually shaped roof with limited options for anchor points to support a PV array. “The reason many of our installations win out over conventional racking is not a question of cost but rather mere feasibility,” says Alberto Di Gaetano, the Managing Director of the company. “Considering the savings of our system – no ballast, zero or almost zero membrane drilling, super-fast installation, and one third the weight of traditional mounting systems – an installer can save up to 40% of their total costs,” he says. The A+ design permits arrays over arched roofs, down steep grades of terrain, over obstacles, and they can be attached vertically on structures like silos. For commercial flat roofs with limited static load reserve to support solar panels, the wire rope system has the advantage of imparting little over 10 kilograms of weight per square meter compared to 15 kg/m2 for systems requiring drilling, or compared to over 30 kg/m2 for aerodynamic systems on a 10 degree slope, or to about 65 kg/m2 for systems on a 30 degree slope requiring ballast, the company indicates. Overall, the A+ support system represents only one third of the total PV system weight – with panels representing the other two thirds of the weight. In contrast, the traditional PV racking systems requiring ballast for the sloped roofs can be six times as much weight as the panels, Di Gaetano indicates.

pv magazine, April 2014 issue, article titled, Research to slash BOS costs, p. 68: Last issue, pv magazine erroneously stated that the A+ mounting system from A+ Sun Systems represented one third of the total PV system weight. We apologize for this error. In fact, the A+ tensile structure represents only one third of traditional mounting system weight, says Alberto Di Gaetano, the company MD, and does not use ballast. These two factors combined allow installation on weak roofs with the advantage of zero (or very little) roof membrane drilling. This is possible on flat, sloped and round roofs.

Tensile roof structure
Scroll to top
Information: this site uses technical or third-party cookies necessary for the operation of the site. By continuing to browse, you consent to the use of these cookies.ACCEPT AND CONTINUE BROWSINGRead the complete policy